All games are available on YouTube – The NLL Live experiment was OK. I complained about it a lot and there were technical glitches, but if they do it again next year, I’ll complain and grumble some more but still get it. But it would be way better for existing fans and to try to pick up new fans if the league went back to YouTube for ALL games. Yes, maybe the league made a few bucks from NLL Live because people had to pay to watch the games, but I’m guessing the number of people who ended up watching games this year was far less than in previous years. Some die hards like me paid for it, but my A2L co-host Melissa, a similar die-hard (you might say she’s addicted to lacrosse), decided it wasn’t worth it. If she’s not going to pay for it, you’re not going to get any new fans that will. 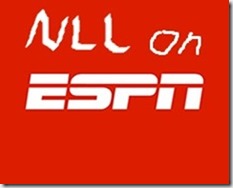 A major TV deal – Duh. This has been on every NLL fan’s wish list for two decades. It doesn’t have to be all the games on NBC, ESPN, or TSN, but at least one or two a week on one of those networks would be good (as long as the rest are on YouTube). And get actual lacrosse guys to do the play-by-play and commentary. Guys like Teddy Jenner, Jake Elliott, and Jason Gregor out west, and Brian Shanahan and Andy McNamara in the east. Not Chris Driscoll.

The Blue Cross Arena gets a new hi-def system installed – It’s good that Vancouver and Rochester are three time zones apart, since games in both the LEC and the BCA are rarely on at the same time. If you were able to switch back and forth between feeds from these two arenas, the difference would be night and day. And not just regular night and day – night and day in the Sahara Desert, where there are no lights with a thousand miles at night and blinding sunshine during the day. LEC feeds are almost always crisp, clear, and high definition while feeds from Rochester are generally terrible. Maybe Santa Styres will leave a new video setup under the Knighthawk tree this Christmas.

Expansion – I think the time is just about right for the NLL to expand. There are more than enough good players to put together another good team, maybe even two. But unlike the Jim Jennings era, the $3 million expansion fee should be step 1 of many, not the only entry criteria. We need committed owners who understand that this is an investment on which they may never make profits but are willing anyway – or NHL ownership, in which case they might actually make a profit. We need a ton of market research on the location. We need a good arena deal. We need a lot of marketing and pumping the new team & brand around the new city – preferably for months before the season starts. There’s a ton to consider. Ideally, all of that can get done in time for the 2016 season, which means they need to start pretty soon. But if not 2016, definitely 2017.

Better social media – The NLL needs to hire Paul Tutka now as Marketing VP or Special Consultant or something and just let him go wild. He’s been tweeting ideas for making the NLL better since last year and is up well over 100 now. Most of them have nothing to do with the product on the floor, but deal with how the league handles Twitter and Facebook, pictures and videos they post, how their web site is organized, things like that. I can’t say I agree with 100% of them, and some of them are vague “Do this better” sort of suggestions, but I do agree with most of them. But I believe social media is a big part of Tutka’s current job, so he’s the expert, not me. He obviously knows lacrosse and the league better than most, so I think his expertise would be invaluable.

A better relationship with other lacrosse leagues – This might be a pipe dream based on how things have always been, but a guy can dream, can’t he? The NLL, MLL, MSL, and WLA all adjusting their seasons to allow players to play in any combination of them (well, maybe not MSL and WLA). Each promoting the others, giving ticket discounts and such. Each talking positively about the others. Wouldn’t it have been cool at the first Rock home game to have the Rock congratulate Miller, Doyle, Gamble, etc. on their Mann Cup victory?

The way it is now is simple – we don’t talk about you, and you don’t talk about us. We’ll all just pretend we’re the only lacrosse league there is. I have even heard that NLL execs are not allowed to mention the MLL by name. I find this difficult to believe, but in a press release this past season (that might have been about Jeremy Noble, I don’t remember), the NLL referred to “the field league” without saying “MLL”. This is simply childish.

What did I miss? What’s on your wish list?