The news came out a couple of weeks ago and caught the NLL world by surprise – Tyler Richards had been moved by the Stealth from the retired list to the “active roster evalutation list”. As revealed on Teddy Jenner’s Off the Crossebar podcast, Richards simply missed the game too much and wanted to return.

Normally this would be fine. Lots of people have retired and then un-retired, most notably Gary and Paul Gait in the NLL, Michael Jordan in the NBA, and Mario Lemieux in the NHL. But this one makes me nervous because of the reason Tyler Richards retired: multiple concussions.

A number of years ago, Stephen Stamp wrote a must-read article for IL Indoor about concussions and their effect (note that the formatting of the article was messed up in the IL Indoor website redesign from a year or two ago). He talked to Tracey Kelusky, who lost playing time due to concussions, and Merrick Thomson, who had to retire after only two seasons in the NLL. But the most frightening part of the article was his conversation with former Bandit goalie Ken Montour, who was hit in the head (with a player’s knee) during a game and never played lacrosse again. At the time of the article he hadn’t been able to work (as a teacher) in a year and a half either. 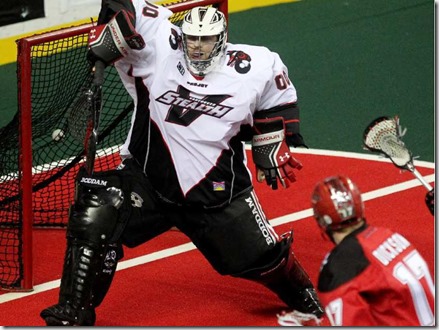 In some cases someone who is concussed feels weird for a couple of days and then they’re fine. They just “got their bell rung”. But I work with a woman who smacked her head on her kitchen cabinet and was off work for at least 8 months because of concussion symptoms. Kelusky, Dan Carey, and many others have missed significant playing time, while concussions ended the careers of Thomson and Montour and in Montour’s case at least, affected his off-floor career as well.

While concussions are still not entirely understood, it’s fairly well documented that people who get them are more likely to get them again. So this is not like a knee or ankle or shoulder injury where with the right medical care and enough rehab, you could be back to your pre-injury level and you are at no increased risk of re-injuring yourself. Richards cannot simply say “I was hurt before but I’m better now.” The more concussions you get, the more you’re likely to get, and the worse they’re likely to be. It’s true that one bad hit could take anyone out of the game for good, but in Richards’ case it’s more likely than others, and the hit doesn’t have to be as hard to cause damage.

So Richards is more likely to suffer a concussion than other players, but perhaps he feels the risk is worth it. Remember, he was never told by doctors that he should retire. But he also needs to consider his quality of life if he suffers more concussions. What if another shot to the head ends your lacrosse career and your off-floor career? I imagine that living with chronic knee or shoulder pain due to sports injuries is no fun at all, but having to live with headaches, dizziness, and difficulty concentrating for the rest of your life would be much worse.

I’m sure Richards knows all of the risks. I’m sure he’s talked to doctors and his family and the Stealth people and they’ve all come to the conclusion that this is a good idea. Who am I to tell him he’s wrong? That said, I can’t help but feeling a little uncomfortable with it. Remember, he’s a goaltender so it’s not as if he’ll be fine as long as nobody cross-checks him in the head. People are shooting a rock-hard rubber ball at him as hard as they can. Taking shots off the head is an absolutely unavoidable part of his job.

I wonder how many players who we enjoy watching today could have had their careers cut short if the NLL hadn’t made a point of cracking down on head shots in recent years. Would we have missed watching Shawn Evans for the the last few amazing years? Or Cody Jamieson? What if Brett Hickey had been concussed by a hit to the head in his final game with the Stealth? We might have been deprived of his remarkable 2015 season and a remarkable young athlete, and he would have been deprived of a lot more.

An interesting question is how will this affect opposing shooters? If you’re Kevin Buchanan and can shoot 100 mph and you’re facing TRich, do you dial it back a notch hoping not to be the one to end his career? Do you shoot low even if you see a high opening? Do you try a cross-crease dive if there’s even a chance you run into him? I can’t imagine that none of the opposing players have thought about this. This isn’t just changing your behaviour because different goalies have different strengths and weaknesses, this could be taking it easy on him so as not to injure him. The cynic in me can’t help but wonder if this gives the Stealth a tiny little advantage. I totally understand that a team wants to take every advantage it can get, but I’ll be honest, using something like this to your advantage seems a little scummy.

This should go without saying but I wish Richards nothing but the best in his return. I hope this is all for naught and he never suffers another concussion. He’s not even 30 so he could have another decade of lacrosse in front of him. However I know that whenever I see him between the pipes and someone is rearing back to fire a laser at him, I’ll be hoping for a goal so that the ball misses his head.