So that’ll do it for the 2022 regular season. The playoffs begin next weekend, so congrats to the Bandits, Rock, Thunderbirds, FireWolves, Seals, Mammoth, Roughnecks, and Wings for making the playoffs.

For the first time since either team came into existence (2016 in both cases), neither the Saskatchewan Rush nor the Georgia Swarm will be playing in the post-season. The last time the Rush franchise missed the playoffs was 2011 as the Edmonton Rush, and the last time for the Swarm franchise was 2015 as the Minnesota Swarm.

I’m not exactly sure what I got wrong in last week’s report, but my analysis of who would make the playoffs was wrong. Albany and Philly won, and both made the playoffs, but in my scenario describing that situation, I said that Philly would take the east and Albany the west, when it was the other way around. I should also have realized that I had a scenario where Albany would miss the playoffs if they won and yet also said that they were in if they won.

This is my final weekly report for the regular season, but of course the awesome-ness (and not-awesome-ness) will continue throughout the playoffs.

Before the season began, Jeff Shattler announced that it would be his final season in the NLL. He played a single game as a member of the Buffalo Bandits in 2006 (picked up an assist on a Dan Teat goal), and was traded to Calgary along with a second round draft pick for Kevin Dostie. He played more than 200 games over 11 seasons in Calgary before signing as a free agent in Saskatchewan before the 2018 season. Shattler was named both Transition Player of the Year and MVP in 2011, NLL Finals MVP in 2018, and won Championships in 2009 with the Roughnecks and 2018 with the Rush. 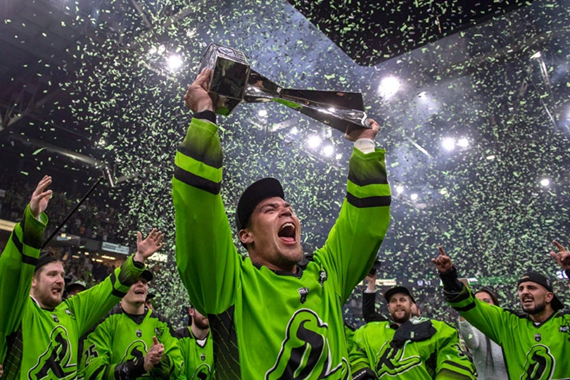 He never led the league in scoring, and only led his team in scoring once (2011, tied with Dane Dobbie), but he was one of the top scorers on the Roughnecks for more than a decade, and one of the most well-respected players in the league his entire career. Congratulations to Jeff Shattler on his retirement and for his outstanding NLL career.

End of the season games

The last weekend of the season featured every single team and decided for three teams whether or not they made the playoffs, and also decided all four first-round matchups. In addition, most of the games were close, and even the one that ended up as an eight-goal game was tied at halftime. There were two games that had no effect on anything (TOR/BUF and SSK/PCLC), and even they were close and hard-fought. Nothing better than ending the season with a bunch of exciting and meaningful games.

Not a single team reached an average of 10,000 per game this year. Obviously that’s because of the pandemic, with the attendance rules, masking and social distancing mandates, border crossing limitations, and many people just reluctant to go to any place that might be crowded. But by the end of the season, most of the rules and limitations had been lifted, and people were a little more comfortable being in a crowd. Last Saturday’s game in Buffalo reached 13,000 and the one in Calgary hit almost 16,000. These two were the top two games in attendance this season. Both Buffalo and Calgary reached the 9,000 mark for the season, and Saskatchewan, Colorado, Georgia, and Toronto reached 8,000. It’s awesome to see these kinds of high attendance numbers again after so long.

Sorry, wait. Did you say Georgia?

Yes, I did. 2022 was the Georgia Swarm’s best season in terms of attendance. They had a .500 season and missed the playoffs, but had more than double the attendance of their 2017 season where they won the Championship. I don’t know if the Swarm have just gradually won over the fans in Atlanta / Duluth / Gwinnett County or if their marketing people have been working overtime but assuming the numbers are accurate (there were questions about that in previous years), kudos to the Swarm.

Not that Dhane Smith isn’t awesome, but on the cusp of breaking his own NLL single-season record for points, Smith had his first zero-point night in over five years. I didn’t think he played badly (he did lead the team in shots on goal) but the Bandits only scored seven goals, and he just wasn’t involved in any of them. What’s odd is that he played a number of shifts on defense. This isn’t really that unusual for Smith since he is an excellent defensive player, but there were a few cases where he was “caught” on defense but still had plenty of time to get off the floor while the Rock were transitioning, and chose not to. If this has been a must-win game for Buffalo, I might have suspected that he decided to avoid the record because it would distract from their goal of winning the game. But the outcome of the game was never going to have an impact on the standings or playoff matchups or anything. The game ultimately didn’t mean anything and I’m sure Smith is far more concerned with winning a Championship over beating a record that he already owns, but it would have been a big deal, particularly in Buffalo, if he had set it.