After finishing the season with a 5-0 week I ended up at 58-23, slightly ahead of my Addicted to Lacrosse co-hosts and ahead of everyone from IL Indoor except Bob Chavez, which whom I ended up tied. I like to think I have some insight into the NLL but let’s face it, much of that is luck and the fact that the parity in the league has diminished in the past year. That won’t stop me from bragging about it though!

I went to a local Chinese food place for lunch today and got this fortune in my fortune cookie, which bodes well for the Rock and Roughnecks, not to mention myself: 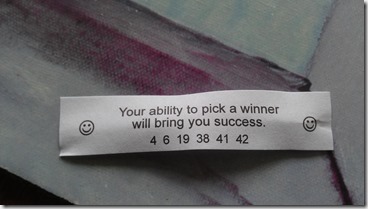 Only 8 more games (plus up to 3 mini-games) left. Not sure how the mini-games are going to work – if I pick the same team to win games 1 and 2 then I don’t even think a mini-game will happen so how can I make a pick for it? Alternatively, if I think it will happen and make a pick and it doesn’t happen at all, does that count as an incorrect pick? I’ll probably just fold the mini-games into game 2 and consider it an overtime period. Or something. I’ll have to play that one by ear.