Lacrosse is back! The 2019-2020 NLL season started last weekend and the Rock’s home opener was Saturday night. Dan Dawson and David Brock both made their debuts with the Rock, while Jordan Durston and rookie Andrew Kew made their Black Wolves debuts. This was a back-and-forth game for a while… until it wasn’t.

END_OF_DOCUMENT_TOKEN_TO_BE_REPLACED

Every season, the NLL tweaks their rule book. Some changes are significant (eg. when they changed the 10-second clock to 8 seconds a few years ago), while others are less so. This year, the rule changes have gone under the radar – I have seen precisely no mention of them anywhere. That’s probably because most of these changes are not all that impactful, quite honestly, but there are a couple that may affect play here and there. There is one, however, that might be a very big deal.

END_OF_DOCUMENT_TOKEN_TO_BE_REPLACED

When I posted my Who’s In, Who’s Out article last week, loyal reader Mike suggested creating a list of all family members in the NLL as well. I thought that was a fun idea, so here you go.

I’m only listing relationships if both players are on active or practice rosters or are NLL coaches or GMs. I made a couple of exceptions for IR or holdout lists too, but if I start to get into retired players, we’d be here all day.

The majority of these I’m sure of but there are a few that I’m only mostly sure of. I tried to confirm as many as I could but if I have any wrong, or I’m missing one, please leave a comment or find me on twitter and let me know!

Tyson Bell – nephew cousin of Billy Dee Smith, (assistant coach) Halifax, also cousin of Dhane Smith, Buffalo, also cousin of Latrell Harris, Toronto
Zach Currier – brother of Josh Currier, Philly
Greg Harnett – brother of Jon Harnett, Buffalo
Jesse King / Marshal King – brothers
Update: Tyson Bell’s mom told me that there was an article a few years back saying that Billy Dee Smith was Tyson’s uncle, but that was incorrect – they are cousins. That article is where I originally got my information from. Thanks for the correction! 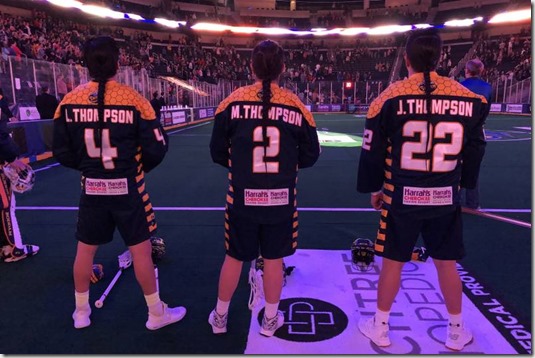