Lacrosse is back! The 2019-2020 NLL season started last weekend and the Rock’s home opener was Saturday night. Dan Dawson and David Brock both made their debuts with the Rock, while Jordan Durston and rookie Andrew Kew made their Black Wolves debuts. This was a back-and-forth game for a while… until it wasn’t.

Dan Dawson opened the Rock’s scoring for this season less than a minute in, and Dan Craig got his first of the season only thirty seconds after that. And then the Rock cruised to an easy victory, right? Nuh-uh. New England scored seven of the next eight goals, taking a 7-3 lead. The Rock got back to 8-6 by halftime, and scored the first two goals of the third quarter to tie it up, but they never scored again. The Black Wolves scored three unanswered in the remainder of the third and the only goal of the fourth was a Nick Chaykowsky empty-net goal with a minute and a half left. Final: New England 12 Toronto 8.

It was obvious that this was the first game of the season for both teams. There were missed passes all over the place, particularly on the Rock side, and the Rock were missing the net all night long. The Rock had fewer missed passes in the exhibition games last month than they did in this one. The first quarter was good but it seemed that they got sloppier as the game went on. The scoresheet says that the Black Wolves had 51 shots and 19 shots off net while the Rock had 54 shots and an amazing 37 off net. Jones, Schreiber, and Hellyer combined for thirty shots (and fifteen shots off-net) and two goals.

That said, the way Doug Jamieson was playing, maybe the Rock players were trying to pick corners a bit more than usual because he had everything else covered. Jamieson had a great night. He made some excellent stops and made the Rock work for their goals, other than one that was accidentally batted in by Black Wolves defender Mackenzie Mitchell. Adam Jones got credit for that one, despite being miles away when it went in.

At the other end of the floor, Nick Rose was inconsistent. He’d make a couple of amazing saves in close and then allow a goal from twenty feet out. Maybe he was screened on some of those, I don’t know, but it wasn’t one of his better outings. The Black Wolves offense was kind of sloppy here and there as well but like all successful teams, their best player was their best player. Callum Crawford was everywhere and scored a couple of beauties, including one where he had two defenders draped all over him and still managed to not only get the shot off but put it top corner AND draw a penalty on the play. 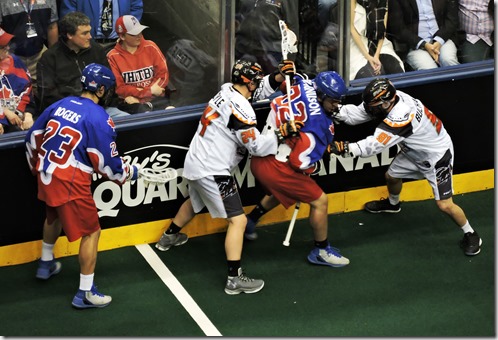 Rock transition was very good and not very good at the same time. There seemed to be a lot of transition chances, but many of them ended with quick ill-advised shots, and so the whole possession took five seconds. They had to turn around right away and get back on D again. When you’re down by a few, especially late in the game, you can’t afford to waste possessions.

There was one play in the fourth quarter that I need to mention. If you are watching the replay on BR Live, go to the 1h43m mark. A Rock player takes a shot on Jamieson, who lets it hit him and drop into the crease. He does not pick it up or cover it, but basically blocks access to the ball with his stick. Dan Dawson is standing on the edge of the crease pointing at the ball to the ref, who’s just standing and watching. He has not signalled a change of possession, so the Rock’s shot clock is still ticking down (Jamieson is doing this just to kill a few seconds off the clock). After a few more seconds, Dawson pokes at the ball but hits Jamieson’s stick instead, causing Jamieson’s stick to touch the ball. He then picks it up, the ref signals a possession change, and starts the chopping motion they do to count down the eight seconds.

Jamieson tries to pass it to someone but the ball misses its target and Dan Craig picks it up. He sends it up to Dawson who’s still on the crease. He fakes and then tosses it to Scott Dominey, who buries it. Glenn Clark calls for a review and the goal is called off. In the explanation, the ref said “The Toronto player interfered with the goalie who has possession in the crease”. That is goaltender interference, so the rest of the play is negated, including the goal, Toronto does not get a penalty, and play continues.

I think this call was wrong. Jamieson did not have possession of the ball when Dawson touched his stick – that’s why the ref hadn’t restarted the shot clock and hadn’t started counting eight seconds. The Rock still technically had “possession”, which is why their shot clock was still counting. The ref overturning the goal was basically saying “we should have called goaltender interference” but if they had, it would have resulted in a loss of possession for the Rock – which is exactly what happened when Jamieson picked up the ball. The non-call of interference changed nothing.

Note that I’m not outraged by this injustice. I did not scream and yell at the refs, though a number of fans near us did. I think they got it wrong, but I may be missing something. I’m willing to accept that they probably know more than I do about lacrosse. Did it affect the outcome?Probably not. But that goal would have made it 11-9 with nine minutes left, and that might have given the Rock the spark they needed to get back into it. Instead it was still 11-8 and they were deflated even more. They hadn’t scored in almost twenty minutes, and now even when they do score, they don’t score. Am I being a Rock homer? Maybe. But I still think it was the wrong call.