Earlier this week, I listed the top 5 surprises of this season, so now it’s time for the top 5 non-surprises. Here are things that happened that we probably could have foreseen.

The #1 and #2 picks in last year’s draft, big things were expected from McIntosh and Thompson and they have not disappointed. Coincidentally, both are sitting at 43 points right now (McIntosh has one more goal and one fewer assist) though Thompson has played one more game than McIntosh. In fact, they only differ by 2 in power play goals, by 11 in shots, by 4 in loose balls, and by 1 in penalty minutes. They’re having the same season. Big question I can’t answer yet: how on earth do we pick between them for Rookie of the Year?

The Rush are giving up an average of just under 10 goals per game, ½ a goal better than anyone else (and 5½ better than the Stealth). Aaron Bold’s GAA of 9.36 is the lowest of anyone who’s played more than 19 minutes (hi Angus Goodleaf!) and he’s 5th in save %. Still, even with these outstanding numbers, Bold’s GAA is half a point higher than last year and the team is allowing 1.2 more goals per game than last year, which just tells you how amazing the 2014 Rush were. 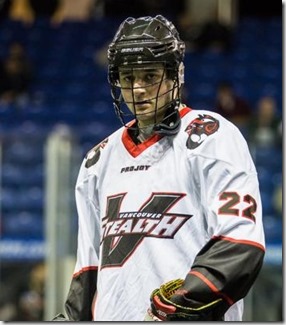 Brett Hickey’s career stats before the 2015 season: 5 goals, 5 assists, 9 games, 2 Stealths (Washington in 2012 and Vancouver in 2014). So far this season: 33 goals, 15 assists, 13 games. But as I said in the Top 5 Surprises article, Hickey has been lighting up the WLA for two years, finishing in the top 10 in scoring twice. I certainly thought he’d improve on his 1.11 points per game pace, and I read a number of tweets and blog articles before the season talking about how Hickey was going to light up the NLL as well. I have to admit that I didn’t expect these kind of numbers, but the fact that he’s doing well is not a big surprise.

We knew that Noble wasn’t going to play for the Knighthawks. We knew that he lives in Denver and plays for the Outlaws in the MLL. And we knew that the Mammoth had an interest (and who wouldn’t?). So it was almost just a matter of time before this deal got made, and as I said on Addicted to Lacrosse a couple of weeks ago, it looks like a good deal for both teams. Another big question I can’t answer yet: could Noble be the Rookie of the Year after playing at most 9 games?

Over his two NLL seasons, Smith has shown himself to be a great offensive player, but the Bandits decided to use him on defense and transition a lot. This was not a terrible decision; he’s very good in that role as well. (And it’s not the first time the Bandits have done this – they made Mark Steenhuis a transition player after a 50-goal 101-point season followed by a 90-point season.) But when they chose to have Smith play a primarily offensive role this season, we all knew the effect he’d have and the numbers he’d put up. And Smith has delivered. After two seasons averaging a little over 3 points per game, he is currently averaging 5.38 points per game and is tied with Ryan Benesch for both the team lead and 4th on the overall scoring list. This surprises me not at all.