After the huge trades we saw at the trade deadline last year involving names like Billings, Suitor, Powless, and Schuss, you’d think the NLL might be all blockbuster’ed out for a while. It lasted about half a year before we started seeing some more “holy crap” trades. But it all seems like one big trade involving almost half the teams in the league. I almost started to lose track of who went where, so I’ll break it down.

OK. At the trade deadline last season, Garrett Billings was sent to New England for Kevin Crowley. As posited by me and totally unconfirmed and uncorroborated, this deal included a gentleman’s agreement that Crowley would be sent back to New England at the end of the season. This happened in early October, as Crowley was traded to the Black Wolves for draft pick Dan Lintner and a second round pick in 2016. This wasn’t quite a Holy Crap trade, but it was significant.

But the combination of Crowley and Billings on the same roster was not to be. Holy Crap Trade #1 happened two weeks later, sending Billings to Vancouver in exchange for Tyler Digby and a second round pick in 2017. This is where Billings’ part of the story ends. He’s now playing in his home town of Langley, and western goalies are very worried about the impact he’ll have on guys like Rhys Duch and Corey Small. But we weren’t done yet. A day later, Holy Crap Trade #2 happened. 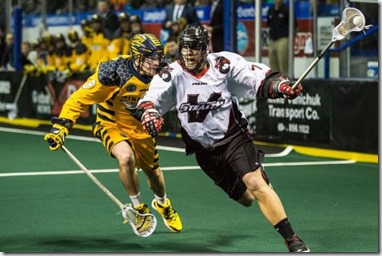 Tyler Digby, it was said, wanted to be in the East because he recently moved to Pennsylvania. But the ink on his trade to New England was barely dry before he was traded again. Digby went to the Calgary Roughnecks for who else but the reigning league MVP, Shawn Freaking Evans, who wanted to play closer to his home in Peterborough. New England’s first round draft picks in 2018 and 2019 now also belong to Calgary, and Calgary’s third round pick in 2018 goes to New England. This marks only the second time in league history that the current MVP was traded, the first being Gary Gait who was sent from Philadelphia to Baltimore in 1998. But as surprising as the Evans trade was, the Gait trade blows it away. At that point, Gait had won three straight MVP awards and after the trade, he won the next two as well.

Did you sense the trend here? Billings is back home. Evans is closer to home. Crowley lives in Philadelphia, so he’s also closer to home. Digby wanted to be, but it didn’t work out. And the reason Gait was traded in 1998? To be closer to his home in Baltimore.

The trades themselves might have been surprising, but if the reasoning behind them surprises you, you’re obviously new here. Welcome to the NLL.

I’ll break down my impressions of each team’s outlook once the rosters are announced in December, but here’s the end result for now:

Toronto is down Kevin Crowley and up Dan Lintner and a second.

New England is down Billings and two first rounders (in 3 years), and up Shawn Freaking Evans and a third.

Vancouver is down Tyler Digby and up Garrett Billings

Calgary is down Shawn Freaking Evans, and up Tyler Digby and two firsts.

One thought on “NLL Trades: one big, two bigger”