A number of player and team milestones can be reached this year. Here’s a list of the most likely:

Rochester’s first win of the season will be the franchise’s 200th. Calgary needs three for 150.

Buffalo needs three away wins to give them 100 in franchise history.

Toronto’s next win at the ACC will be their 100th home victory.

The Vancouver Stealth will break into double digits in the “away win” category with their first win on the road. That’s right, after four full seasons in Vancouver the Stealth have only won 9 games on the road. Total.

Buffalo is 63 goals away from becoming the first NLL team to score 5000 goals. They are already 500 goals ahead of anyone else (Wings) and 700 ahead of any active team (Knighthawks). On the other end of the spectrum, Saskatchewan needs 36 goals to reach 500.

Dane Dobbie will take over the all-time Roughnecks lead in points from Jeff Shattler with his 18th of the year. Stephan Leblanc could pass Josh Sanderson for 3rd on the Rock’s points list with 77 points. Dhane Smith needs 22 goals to tie Mike Accursi for 3rd all-time in Bandits goals.

Small sidetrack: I’ve talked about John Tavares and his amazing numbers a million times here, and I’m going to do it again. After only five seasons, Dhane Smith is already third on the Bandits points list, but he’s 542 behind the still-active Mark Steenhuis, who’s 779 behind John Tavares. Steenhuis is second in Bandits goals but needs 371 to catch JT. To illustrate just how far behind that is, only 14 players have ever scored more than 371 goals in their career, and Shawn Evans isn’t one of them. In order to break JT’s record, Steenhuis would have to score as many goals as Shawn Evans ever has – starting now – and he’d still be short by 3.

In case there was any doubt before now (and there wasn’t), Tavares’s records will stand for a long time. OK, back to the milestones for 2018. 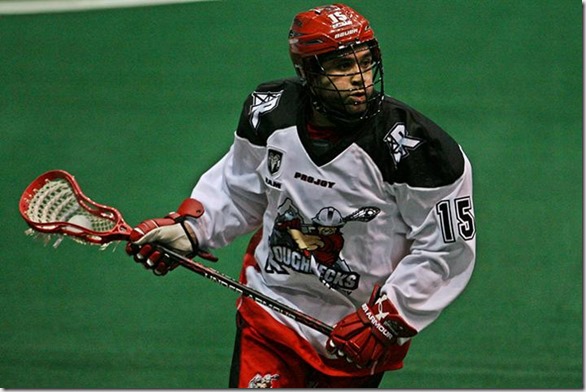 This section is for players who are close to passing a retired player on the career list in a particular category.

Brodie Merrill will break Jim Veltman’s career loose ball total of 2417 early in the 2018 season. I predicted this back in 2011, though you’ll notice I assumed Merrill would play in all 16 (not 18) of his team’s games every year, and I did not foresee Geoff Snider’s retirement.