The Rock just keep rolling. I really tried not to use that old cliché but it’s just so appropriate right now. The team had averaged more than 20 goals per game over their last three and still managed to increase that average. Meanwhile the defense managed to prevent Shawn Evans from scoring and kept their opponents to under 10 goals for the third straight game.

The Rock offense took a while to get going. After Rob Hellyer’s goal 36 seconds in, it was almost nine minutes before their next goal, and then another 5½ before their third. I guess that’s their 2018 season in a nutshell: took a while to get the offense going but once they did… look out. Adam Jones continues to look much more like the Colorado Adam Jones than the Saskatchewan one; he, Hellyer, and Tom Schreiber seem to really love playing together. Craig, McArdle, and Reinholdt continue to produce as one of the better secondary scoring teams around. On the other hand, Brett Hickey only had one goal and that was in garbage time. He has less than half the points of Hellyer, Schreiber, and Jones, so I’m not sure what’s going on with him. Maybe he’s struggling with the new system, or perhaps he’s playing the Kasey Beirnes role – more of a grinder, allowing the other guys to get open rather than scoring the goals himself. But his ten shots on goal tell a different story. I’ll have to pay some more attention to him and see.

Tom Schreiber continues to work his butt off on every shift. It’s not just his goals which range from long-distance bullets to acrobatic crease dives, but he sets hard picks, digs in corners, holds onto the ball despite being double-teamed, and makes pinpoint passes through traffic when a teammate is open. He is quickly becoming my early pick for MVP. We’re only a third of the way through the season so obviously a lot can change but the man does everything, and does it very well. 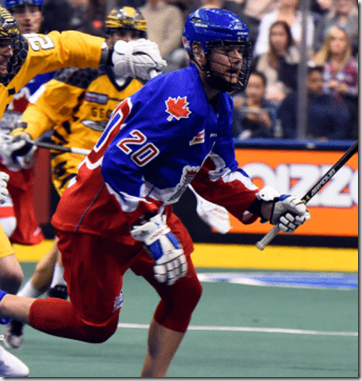 The Rock as a whole were battling hard all night. Everyone was working for loose balls and intercepting passes (that happened a lot on both sides, actually). Even once they were up by seven or eight, they kept working hard – until they stopped. I’ll get to that in a bit.

Offense tends to get the glory, but Toronto’s defense had another strong game as well. In particular, I thought Brad Kri had an excellent game. Shawn Evans was frustrated all night that he couldn’t get clean shots and when he did all he could see was Rosey. He ended up with no goals, which is rare for Evans. The two Kevins, Buchanan and Crowley, managed to get open once or twice each and shot lasers past Rose, and former Rock forward Stephan Leblanc scored a couple as well.

Rose was strong most of the night, making a couple of highlight reel saves, though a couple of the goals he did allow were kind of soft and he probably wants them b… I mean they’re shots he probably should have stopped.

Aaron Bold didn’t have a great game at all, which should be obvious given the score. Glenn Clark left him in for quite a while – it was into the fourth quarter before Bold got the hook, and he’d already given up 16 goals. Doug Jamieson gave up five in 14 minutes so both goaltenders ended up with almost identical GAAs: 20.98 for Bold and 21.05 for Jamieson. Some of the goals weren’t the fault of the goaltenders though. When Adam Jones has the ball alone on the edge of the crease and has a couple of seconds to decide where to put it, that’s a defensive breakdown, not a failing of the goaltender. If you’re a baseball fan, that’s the “unearned run” of lacrosse.

One interesting thing I noticed about Bold: immediately after he allows a goal, sometimes before the ball is even retrieved from the net, he gets himself set up again and practices the moves that would have stopped that shot, like “here’s what I should have done”. He does that once or twice, then gets on with the game. Matt Vinc does this as well. Maybe that’s their way of not allowing a goal to get to them and affect their confidence – this is the mistake I made, here’s how I’ll stop it the next time, now we can move on. Nick Rose doesn’t do the “practice” thing but he’s also really good at not letting goals rattle him.

The game was quite entertaining for the most part, but it seemed that “garbage time” lasted quite a while. The Rock kept pushing the ball and playing hard until they got to 20 goals, and then they flipped the switch to keep-away mode. The Rock scored six goals in about four minutes at the beginning of the fourth quarter, and then only one more over the next 10+ minutes. As soon as they hit 20, each Rock possession took 29 seconds and they passed up a few obvious scoring opportunities in order to kill clock.  I certainly don’t blame them for this, running up the score any further was unnecessary, I just thought it was interesting how different the game looked the second they they hit the 20-goal plateau.