The 2019 NLL schedule was released this past week. Once fans see their team’s schedule, the first thing fans say about it is how “difficult” it is. Usually that involves what teams they’re playing but today I’m going to look at it a little differently.

Each team plays 18 games and the season is spread over 21 weeks, so each team has at least three weeks with no games (called a “bye” week). Each bye week you get beyond three means you have to make up that missed game by playing two games in a weekend (which I’m calling a “double”). If you’re lucky, one will be Friday night at home and the other will be Saturday night or Sunday afternoon in a city not far away, giving you lots of time for travel and potential delays – remember the NLL plays during the winter. If you’re not lucky… well, we’ll get to that.

Let’s look at how many bye weeks each team has as well as how many double weekends they have (and where those games are). 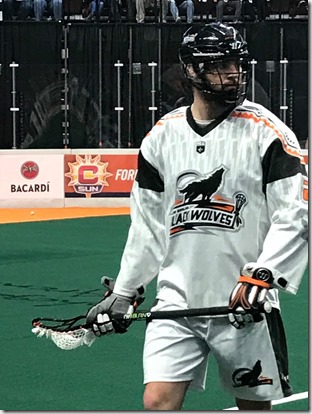 Buffalo: Five bye weeks, but two of them are the last four weeks. They have two double weekends: first Rochester and New England in week 9 and then Philadelphia and Buffalo in week 15. Last year, they also had five byes and two doubles.

Calgary: Four byes, one double weekend: San Diego and Colorado in week 8. Last year the Roughnecks had three byes and no double weekends at all.

Colorado: Four byes but three of them come in the first six weeks including weeks five and six. The Mammoth play twice in week 17, in Vancouver and at home. Last year, they had five byes and two double weekends.

Georgia: Five bye weekends, all spread out. The Swarm have two double weekends: In week 8 they play in Toronto and then New England, then week 9 is a bye, then in week 10 they play at home on Friday and in Rochester on Saturday. Last year the Swarm had six byes and three double weekends. All three of their doubles last year followed a bye.

Philadelphia: Five byes including two back-to-back. They play one game in the first four weeks of the season. They have two doubles: Philly and New England in week 12 (coincidentally, the same as the Black Wolves!) and Saskatchewan and Vancouver in week 20.

San Diego: Five byes including one back-to-back – between January 19 and March 2, the Seals only play twice. They have two doubles: San Diego and Vancouver in week 8 and Georgia and New England in week 19.

Saskatchewan: Four byes including weeks 3 and 4. One double weekend but it’s a doozy: San Diego on Friday and back at home in Saskatchewan on Saturday of week 20. After a brief perusal on Expedia, I found that you can get from San Diego to Saskatchewan in about 7½ hours if you really push it (about 45 minute stopover in Minneapolis) or over 14 hours if you don’t mind a 7+ hour stopover. Either way, that’s going to be a brutal travel day for the Seals and Rush. Five byes and two doubles last year for the Rush.

Toronto: Five byes including weeks 3 and 4 as well as the final weekend of the season. The Rock play two doubles late in the season: Georgia and Buffalo in week 17 and Toronto and Rochester in week 19. Last year, the Rock had three byes and no double weekends.

For my money, the most difficult schedule would be one where you have byes near the end of the season. If you are in the playoff hunt (i.e. every team in the East last season), you want to be playing during those last weeks to control your own fate, not watching others play hoping for the right result. In the last five weeks of the season, the Buffalo Bandits play the Rock twice, the Black Wolves once, and have two byes. Playing teams from their own division is helpful for the Bandits if they’re fighting for a playoff spot but two weeks off is not. On the upside, byes can help players recover from injuries without missing games. If Dhane Smith has a sore knee, a week off before a game with playoff implications could be a godsend.

There are a number of teams that have multiple byes near the beginning of the season but only the Bandits have more than one in the last six weeks or so. In terms of the criteria I’m going by here, nobody has a really terrible schedule. The Bandits byes near the end of the season make them a strong candidate but I’m going to say that the San Diego Seals have the most difficult schedule. They have one game in the first three weeks and then a span of five weeks in the middle with only two games. The game before those five weeks, the game after, and one of the two games in the middle are against the same team – Vancouver. However this schedule challenge is offset by the fact that they get to play half their games in southern California.

I’ll let you, the reader, insert your own joke here: Maybe we should say that [insert team name] has the worst schedule because they have to play half of their games in [insert city you don’t like]. Ha ha!

The league lengthened the season last year in order to try and cut down on the double weekends. The teams that used to be hit the most by long travel days were the Black Wolves and Rush. From most major airports in North America, you can fly directly to Denver or Calgary or Toronto but not Saskatoon, so most flights would have included a stopover. Some of those stopovers can be long, but really, who doesn’t love sitting in an airport for five hours? To get to Mohegan Sun, you need to fly to Hartford CT (also requiring stopovers from many airports, particularly in the west) and then take a several hour bus ride.

Update: Taking public transportation from Hartford airport to Mohegan Sun would be several hours. I would assume teams would charter a bus, in which case travel time is not much more than an hour. Thanks to Thomas for the correction.

In 2019, both of these teams only have one double weekend, so mission accomplished, right? For the Black Wolves, they’re coming from Philadelphia on their double, which is probably the closest NLL city. But as I mentioned above, the Rush have to get from San Diego to Saskatoon in a day. Last year, the Rush had two doubles, playing at home on the back half of each. While one was coming from Vancouver, which is likely a direct flight, the other was coming from Colorado which is almost as bad as San Diego. Those Colorado/Saskatoon travel days were part of the reason for the schedule change in the first place, and yet the Rush still have to deal with one.

It’s not like the people who make the NLL schedule haven’t thought about this, and so it’s likely that as crappy as that weekend will be, it was the best option available.

One thought on “The 2019 NLL Schedule: Byes, doubles, and runnin’ back to Saskatoon”