The playoff picture in the West is almost complete, as Calgary has clinched their spot while Vancouver is out. Only one spot remains in the West, but the battle in the East will take that down to the wire. Right now, the Thunderbirds and Swarm would join the Bandits and Rock in the playoffs, and the FireWolves would take the fourth spot in the West. But Halifax, Georgia, Albany, and Philly are still close enough that any of them may or may not make it, and if Panther City wins their last two games, they could take that fourth position in the West as well. 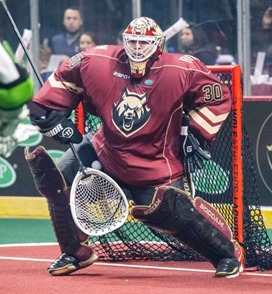 This season has been chock-full of amazing goaltender performances, and this weekend featured a bunch more:

With another 7 assists, Dhane Smith extended his record assists total to 94. He is now 10 ahead of former record holder Mark Matthews and still has a game left. Even if he doesn’t get a single assist in that game, he’ll still hold the assists/game record. He also needs two points to tie his own points record of 137. He hasn’t had fewer than 4 points in any game this year and is on pace for 142. It’s kind of too bad for a guy like Ryan Lee – in any other season, he’d be a lock for MVP. He just chose the wrong season to be that good since Smith is the lock this year.

Two amazing passing plays I must mention. The first was in the Halifax-Toronto game, where Challen Rogers got ready to fire a shot but instead passed to Dawson. Dawson reared back and fired… a pass over to Dan Craig who buried it. Both Rogers and Dawson looked like they were going to shoot but fooled all the defenders and Aaron Bold and passed instead. Some very slick moves resulted in a beautiful goal.

The second one was a sneaky pass from Curtis Dickson to Tyler Pace. Dickson knows that he usually draws the opposing team’s best defender and frequently a second one as well. He started to cross over in front of the net, and then headed away from it. Two defenders followed him while Pace headed towards the net. An almost invisible behind-the-back pass from Dickson left Pace all alone on the crease and he made no mistake.

The Rock hosted Indigenous Heritage Night on Saturday with, appropriately enough, the Halifax Thunderbirds in town. There were traditional dancers and musicians in amazing outfits before the game and again at halftime, a woman sang the National Anthem in English, French, and Anishinaabemowin, and and halftime there was a lacrosse game between Haudenosaunee and Anishinaabe players where the idea was to hit a wooden pole with the ball. This, as you might imagine, looked way harder than putting it in a net. Both teams used wooden sticks; the Haudenosaunee ones were similar to what you might see today but the Anishinaabe ones were tiny circles not much bigger than the ball (see my Twitter profile picture). Most of the players had more trouble throwing and catching with those sticks, but at least one guy seemed very comfortable with them. That game was really interesting to watch.

The Rock also had specially designed jerseys for this game, and they were AMAZING. I’m really hoping Indigenous Heritage Night becomes an annual thing and I’d love to see other teams around the league do the same thing as well.

Earlier this year, attendance numbers were abysmal, thanks to COVID. Not only did the health protocols force attendance numbers down (all the way to zero in a few cases), but many people were still unwilling to be in crowded places and preferred to watch games online. But as the season went on, the numbers started to rebound. Some places still haven’t recovered fully – Saskatchewan, Colorado, and Calgary are still seeing numbers between 8500-9500, 3-4 thousand below their normal average. But Buffalo, Vancouver, San Diego, and Rochester are back to their pre-COVID numbers (BUF: 12k, VAN: 7k, SD: 6k, ROC: 4k). Philly’s last home game had over 10k, Toronto had over 10k on Saturday night and Georgia, who were generally between three and six thousand for their first three seasons, has hit 9k three times this season. 2022 will be Georgia’s best season ever in terms of attendance.