Man, you take one little summer off from writing about lacrosse and what happens? THINGS. Things happen. Lots of things.

We have new winners for NLL awards, we have a new team that has players now, we have a new commissioner, we have a new CBA, we have trades, we have free agent signings, we have retirements, and we have coaching changes. And we still have over three months until the season actually begins!

There have been enough off-season changes that I’ve broken this article into two parts. Let’s get started.

After Nick Sakiewicz decided to leave the NLL back in February, Jessica Berman became the interim commissioner. But only a couple of weeks later, she was offered the job of NWSL (National Women’s Soccer League) commissioner and decided to take that job instead. The NLL then began a very quiet search for the next commissioner. By quiet I mean that there was no announcement of a search beginning (though we all assumed there was going to be one) and there weren’t even rumours of who was leading the search or who the candidates were.

At the beginning of August, former NASCAR exec Brett Frood was named as the new NLL commissioner. I know zilch about NASCAR and had never heard of Frood so I have no useful intel there, but I like what I’ve heard in the interviews with him so far. Everyone who’s talked to him seems very excited about his selection. After listening to him speak, it’s clear that he knows the business side of pro sports very well, and already has some general plans on what he wants to do to grow the league. It’s not really necessary for the commissioner to know the details of the game itself extremely well; Sakiewicz didn’t, but he knew enough to get his job done. But Frood played lacrosse in college, where he won national championships and was his team’s captain and scoring leader. He’s admitted that his playing experience is limited to field lacrosse but he’s watched the box game for years. I like what Sakiewicz did with the league in his term as commissioner so there’s no “thank god that‘s over”, but I’m excited that a lacrosse guy will be heading up the league going forward.

I started to enter “Las Vegas” but a typo led to “Lax Vegas” and I liked it better. 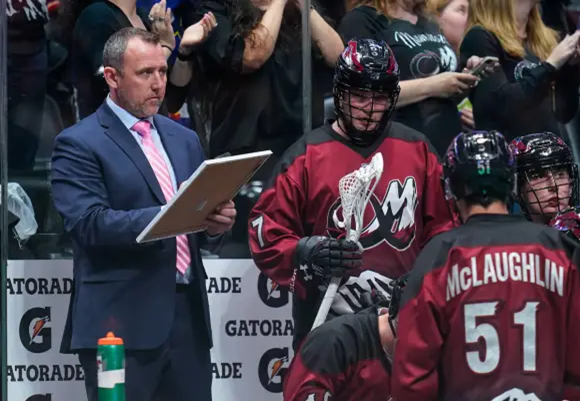 The Desert Dogs expansion draft occurred in early July and while their roster isn’t completely fleshed out yet, the team has some interesting pieces already. Obviously there are a lot of very young players there and as an expansion team, nobody will expect them to be a serious contender in year one. Of course, it’s possible that they could pull a San Diego Seals and be competitive right out of the gate. But even though that’s an unlikely scenario, GM and head coach Shawn Williams has built himself a nice young core of players to build around, including Rob Hellyer (a ten-year veteran but still only 30), Charlie Bertrand, Brandon Clelland, Marshal King, James Barclay, John Wagner, Tyson Roe, and Connor Kirst as well as young goalie Landon Kells. Williams has also built up a number of draft picks through trades – the Dogs now have four first-round picks over the next two years.

In the past, CBA negotiations between the NLL and NLLPA were long, drawn out, and seemingly unproductive until the very last minute. In a couple of cases the season was threatened or delayed, and in one case officially cancelled, because no deal could be reached. Luckily, each time the talks eventually resulted in deals and no seasons were lost. This time, it seemed that things went smoothly, and the deal was reached long before anyone really got nervous that the season was in jeopardy. The CBA is not available to the general public so I haven’t seen it, but it sounds like salaries and per-diems were bumped, and the luxury tax (what the teams have to pay for spending over the salary cap) was also increased. The actual details are likely unimportant to anyone but the players and owners, but the fact that the deal is done lets us all breathe easier and also lets everyone focus on getting ready for the upcoming season.

The 2022 NLL award winners were announced just after the finals ended. Some of the winners were completely unsurprising, like Jeff Teat as Rookie of the Year, Lyle Thompson getting the Sportsmanship award (his fourth straight), and Tracey Kelusky getting the Les Bartley award in his first year as a coach for his remarkable work with Panther City. Dhane Smith was named MVP for his amazing season, though Joe Resetarits also had a great season and got a lot of votes.

Matt Vinc won another Goaltender of the Year award (his twenty-fourth, I believe), though I voted for Nick Rose. Rose’s 13-3 record was as good as Vinc’s 14-4 (slightly better, actually), and Rose’s GAA was a full point less than Vinc’s. Vinc had a lower save percentage but not by much. Then again, Vinc played all but 17 minutes of the entire season in the Bandits net, while Rose was out for over 80 minutes. Vinc also had an outstanding year so it’s not like he’s not deserving of the award. Mitch de Snoo got my Defender of the Year vote and won his first after an amazing season, though I feel kind of bad for Steve Priolo, who’s been nominated for the Defender of the Year award six times but has yet to win one. He’s probably been the second-best defender in the league more than anyone.

Transition player of the Year could have gone to any of the candidates (Zach Currier, Reid Bowering, Challen Rogers) but Currier won his first. I think Rogers will be a candidate more often than not over the next few years (having already won twice and been nominated twice more), and it certainly won’t be the last time you see Bowering’s name on that list either.

Pat Gregoire won his first Borrelli award as the voice of the Halifax Thunderbirds as well as his work on the Off the Crossebar podcast and a ton of social media work as well. Pat’s excitement and enthusiasm are obvious in his broadcasts, not to mention contagious. When he gets excited about something, he makes you excited about it as well so congrats to Greggy on his well-deserved award.