Every group of fans has its homers. You know the ones. If someone on their team hits a player on the other team, that’s gritty, hard-hitting lacrosse. It’s a rough game. If you don’t want hitting, go watch figure skating. But if a player on their team gets hit, that’s a cheap shot.

Every goal against their team is a lucky shot while every goal they score was a brilliant play.

It’s annoying, but I can deal with homer-ism when it’s a fan. But not when it’s an announcer. 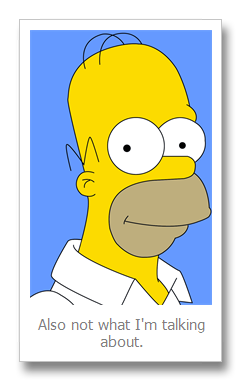 Every team has its home announcers and they don’t try to be completely balanced in their calls. If their team scores, they get loud and excited. If the other team scores, it’s announced with somewhat more subdued tones. If their team scores in overtime, they sound like they just won the Championship. If the other team scores in overtime, the disappointment is sometimes quite evident. I totally get this, and this is not what I’m talking about. They’re excited for the team they work (and likely cheer) for, and I don’t have a huge problem with this or expect anything different.

What I don’t like is when the announcers forget that they’re not just chatting with friends. I don’t expect completely unbiased opinions, but they have to make some sort of effort to be relatively unbiased, don’t they?

In a recent game in Vancouver, Shawn Evans was cross-checked and dropped to the floor. Play was immediately stopped and a Stealth player penalized. The announcer immediately claimed that it was a dive and no penalty should be given. I’m not convinced that it was a dive, but I can’t say for certain that it wasn’t. In my opinion, it wasn’t a blatant dive. Obviously in his opinion it was. At the time I thought that the announcer should have kept his opinion to himself because the player was on the opposing team. If it had been a Stealth player, I imagine he would have kept that opinion to himself. But in retrospect, perhaps I overreacted.

If I’m at a Rock game and I see an opposing player commit some infraction that doesn’t get called, I get angry about it and may question the visual acuity of the officials. But if I see a Rock player do the same thing, I’m not going to scream and yell about the unfairness. I might say quietly to the person beside me “Wow, we got away with one there”. I keep waffling on whether announcers should be afforded that luxury as well. As long as they really do call the games honestly and not with the my-team-coloured glasses on, I think it’s generally fine. Sometimes the players on the other team do dive and the announcers should be able to express that opinion.

But all that being said, sometimes the announcers cross the line from giving a bit of a biased opinion to complete homer-ism.

During a Rock / Knighthawks game earlier this season, Chris Driscoll, who I was a huge fan of during his time with the Rock, made a number of comments that rubbed me the wrong way. The one I specifically remember happened at the 41:50 mark. Damon Edwards scored a very nice transition goal but instead of saying it was a nice goal, Driscoll actually said “It’s one of those things that… it’s unfortunate that stuff like that happens.” He then said it was a nice pass by Gamble but that “it’s unfortunate that [Vinc] didn’t make the save”. Maybe as a Rock fan I was being overly sensitive but that didn’t sound like the kind of thing we should be hearing on the broadcast. Perhaps “it’s unfortunate for the Knighthawks that he didn’t make the save”, but don’t talk like it’s simply unfortunate in general.

But the best one came from the Mammoth announcer at the end of their loss to the Bandits back in January. Shortly before the game ended*, he said that the loss was puzzling or surprising or something because “Colorado has the most talented roster in the NLL”. Do they have some talented players? Absolutely, including John Grant, one of greatest of all time, as well as Westervelt, Jones, Powell (who had yet to play for them at the time), Snider, Dalgarno, and others. There’s talent there, no question. But the most talented roster in the league? That’s a claim that would be difficult for any team to defend. But when your team is 1-5, as the Mammoth were at the time, and just lost by 7, it’s a huge stretch. It sounds just like the kind of thing that someone might say when they’re familiar with their own team and not with any other.

On a recent Addicted to Lacrosse episode, Melissa mentioned that she was watching a game in Edmonton (I believe) and at one point she had to check where the game was located because after listening to the announcers all night, she couldn’t tell. In my opinion, this is doing it right. In the days when a broadcast was completely local, the whole homer-as-announcer thing was commonplace. Say you’re the Detroit Turbos announcer, and the game is only broadcast in the Detroit area. In that case, go ahead, be as pro-Detroit as you want. Just about everyone listening is likely to be a Detroit fan. But in this era of live broadcasts around the world as well as YouTube archives of every game, a good portion of your audience (I’d say far more than half) is going to consist of people who are not fans of the home team. They don’t want to hear “rah rah home team!” announcers. They don’t want to hear “Oh, the visiting team scored. That’s too bad.”  They want to hear more unbiased (or perhaps minimally-biased) analysis of both sides. At least, I do.

What do you think? Should the announcers be completely unbiased? Or should they be able to speak their mind, regardless of how one-sided it might be?