Wow, I haven’t done one of these game report things in a while! I think talking about the games every week on the Addicted to Lacrosse show has meant I didn’t feel the need to talk about them again on the blog. Also since I spend much of Sunday writing the Money Ballers column, I didn’t make time to write game reports as well. But they’re different media; I can get into more details here than I would on the show plus some people simply aren’t interested in watching or listening to a show but they’ll read a blog, or vice versa. 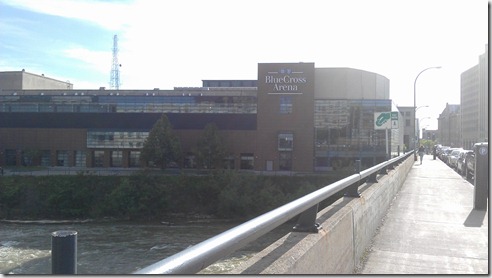 Anyway, the game. Or rather, the games.

First off, I make the trek to Rochester for this one, my first such trip in many years. My tickets were second row from the glass, right next to the Rochester bench. This meant that I could watch the line changes and see everything that happened at one end of the floor. It was great. What I didn’t anticipate was the view of the other end of the floor. When play was happening at the far end, this was my view:

I tried yelling “Angus, sit down!” but he wouldn’t. Actually, that was a joke. I didn’t really consider yelling anything but positive encouragement at Angus Goodleaf. Just doesn’t seem like a very bright move.

So I watched half the game from close up in very high definition, and the other half on a grainy Jumbotron at an angle 100 feet away.

We had a plus and a minus just before the game. The plus was the Native American dancers, who I believe perform at the beginning of every Knighthawks game. That was very cool, and the outfits they were wearing were awesome. That was followed by the minus, the national anthems, accurately described as “lounge-y” by Stephen Stamp in his Championship Game live blog, sung by a guy who should probably have waited until afterwards to start hitting the Genny Cream Ale.

The game itself was very entertaining. You already know the result and how the lead changed hands a couple of times before Rochester scored 6 straight, and Calgary almost came back but never tied it, so I won’t go over all of that. One thing I noticed about the Calgary defense (and to some extent the Rochester defense as well) is that they weren’t trying to prevent shots entirely. There were a few shot clock violations and occasions when a player would just roll the ball into the corner with a second left, but the Calgary defenders weren’t as aggressively trying to keep the Knighthawks from shooting as I’ve seen in the past. They seemed to say “Sure, feel free to shoot, but you’re going to have to thread the needle between a whole bunch of people before it even gets to Poulin.” Rochester did shoot in a lot of cases, and more often than not the ball never got anywhere near the net.

One defensive play I must point out is one by Brad Self late in the third. Unfortunately, I can’t link to a video of the play because the camera was on Mike Poulin at the time, but Poulin made a save and then launched the ball down the floor, looking for Dane Dobbie coming off the bench in transition (as he does frequently). Self made a diving catch just past the restraining line, preventing Dobbie from having a breakaway. The ball then got loose and Dobbie ended up with it anyway, but by that point the defense had come out and Calgary never got a shot off at all. It was an excellent play and really got the crowd fired up.

I do have video of a couple of goals to share, both behind-the-back beauties. First is Cory Vitarelli early in the 3rd quarter, and the other is Stephen Keogh with a little over 6 minutes left in the fourth. Vitarelli’s was particularly nice, since most behind-the-back shots come from in close, but his was from way out there.

Both goalies played very well though Mike Poulin seemed to get rattled a couple of times. This is a problem with some goaltenders – once you get them rattled or shaken up for whatever reason, they’re done. Poulin sometimes does that too but once he gets pulled (or pulls himself), he spends five minutes on the bench or in the dressing room getting refocused. He’s very good at this because more often than not, when he comes back he’s much better. He did this twice during game 2, but once the Knighthawks got on a roll in the fourth quarter, nothing could stop them.

So Rochester dominated the 4th to win game 2, and we headed to the mini-game with Rochester holding all the momentum. But then Shawn Evans and Curtis Dickson opened the scoring for Calgary (just as they had in game 2), and still led with less than 2½ minutes left. Nobody believed it was over at that point, but I thought that the Roughnecks had killed whatever momentum Rochester had going in. And maybe they had, but over the next 1:15, Craig Point and Joe Walters grabbed it right back. The Roughnecks poured on the pressure over the last minute, but Matt Vinc stepped up and stopped every shot, the last one just a second before the final buzzer.

I know there are people who don’t like the idea of the mini-game but after this year’s playoffs, I don’t think it’s going away anytime soon. The first two were very exciting to watch on TV and I imagine this one was too, and it was amazing to see live. I imagine it was everything the NLL was hoping for when they made the decision to move away from single-game elimination.

I have to say that it was pretty painful to watch the Roughnecks leave the floor. Scott Ranger in particular looked absolutely devastated. He was the last Roughneck through the handshake line and it didn’t look like he said a word to anyone. 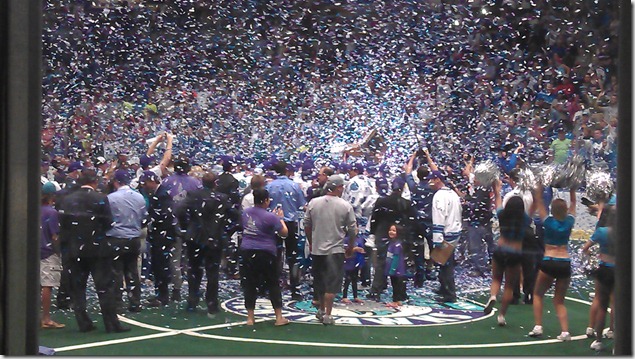 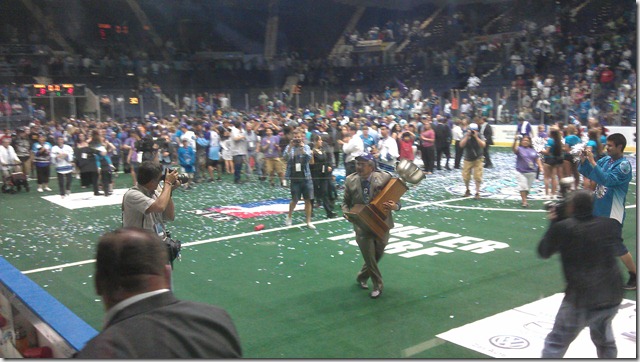 So congratulations to the 2014 NLL Champion Knighthawks, and even more congratulations for the unprecedented three-peat. Rochester is a class organization from the top on down, so it’s nice to see them rewarded with so much success. But hey, three’s enough, dontcha think?

Some general notes about my trip to Rochester