An odd trade occurred on Saturday that I suspect began back in March. The Toronto Rock sent Kevin Crowley back from whence he came, the New England Black Wolves, in exchange for Dan Lintner and New England’s second round pick next year. Crowley, of course, was acquired at the trade deadline last season in exchange for holdout Garrett Billings. Lintner was New England’s first round pick at the draft two weeks ago, 8th overall.

Jamie Dawick is quoted in the press release: “…we’re not far off with this deal from what was also on the table at the trade deadline in March.   We needed a player last year so the 2016 first round draft pick didn’t make sense at the time.” So they agreed in principle to trade Billings for a first and a second, but the Rock needed a player right away so they changed it to Crowley. Now they’ve basically reversed it to what they agreed on originally.

Pure speculation on my part, but it sounds to me like this was a two-stage trade from the start. Instead of the two draft picks, you give us Crowley for the rest of the season, then we’ll trade him back to you for the two draft picks once the season’s done. Perhaps the talking at the draft was that rather than the 2016 first, we’ll take Lintner since we wanted him anyway.

New England kind of won the trade last season, just based on numbers. By the time the deal was done the Rock only had four games left, while New England had eight. The Black Wolves got twice as many games from Billings than the Rock got from Crowley, and Billings averaged 4.5 points per game to Crowley’s 3.0. Then again, the Rock did have Crowley for five playoff games while New England missed the playoffs entirely, so that evens things out some. 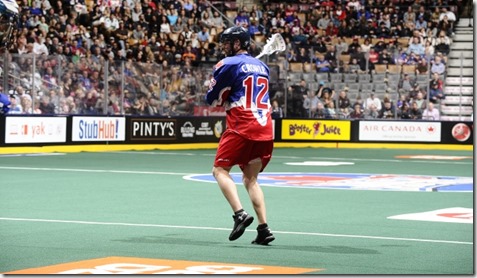 So the deal ends up being Billings to New England for a 1st round pick (Lintner), a 2nd round pick (in 2016), and the use of Kevin Crowley for half a season. Is this fair value for someone who averaged 105 points over the previous three seasons? On the surface, no. But if you factor in Billings’ surgery last year, it’s possible the Black Wolves are not getting  the same Garrett Billings who put up those big numbers. If he returns to his previous level of dominance and puts up the big numbers, then good for him and the Black Wolves win the trade. But it’s also possible that Lintner pulls a Brett Hickey and comes out of nowhere to score 50 goals. Honestly, that seems less likely, but who knows? He was picked in the first round because that is a possibility.

For now, I’d have to say that the Black Wolves are the winners here, but unless Billings returns to his pre-injury form and Lintner is a bust, I wouldn’t say the Rock got fleeced either. As with most trades, we won’t really know who won it until a long time after.

One thought on “The Crowley Trade Episode II: Attack of the Black Wolves”