We all know that teams have an advantage when they play in their home arena. The fans are on your side, the home players don’t have to travel while the opposing players do, and the PA guys get excited about your goals and their penalties but not the other way around. The numbers back this up – in the 30-year history of the NLL (in all its forms), the home team is 973-796 (.550) in the regular season and 92-58 (.613) in the playoffs. Over 1769 games, the home team has won almost exactly 10% (actually 10.006%) more games than they’ve lost. The difference isn’t huge but it’s there, and it’s even more pronounced in the playoffs.

But there’s one home floor advantage that is, in my opinion, too much of an advantage and should be removed. But I’ll get to that.

Much of the advantage is the fans. I’ve heard a number of players say that they tune out the crowd while playing but if the fans are really loud, they do get heard. Having the fans on your side gives you a little mental boost, while having loud fans cheering against you can be deflating. Conversely, we’ve all heard visiting teams try to grab a lead early to “take the fans out of it” since playing in your home arena to silent fans is pretty deflating too. 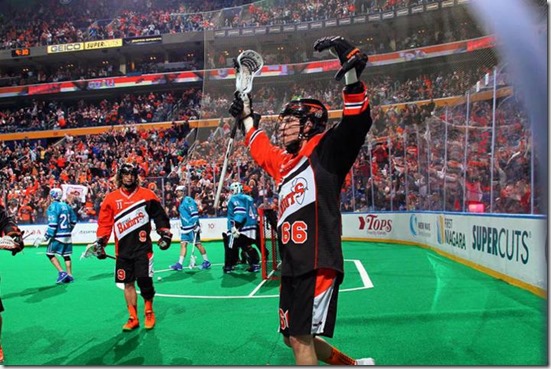 The travel thing I mentioned is not really an advantage in the NLL. The majority of NLL players come from either southern Ontario or southern BC so for most teams, playing in Toronto or Vancouver means the least amount of travel regardless of where the team is based. When Georgia visits Colorado, most of both teams have to travel but when they play in Toronto, it’s almost a home game for both.

But as I said above, there’s one difference that’s too much. It sometimes gets overlooked as an advantage but can really have a huge impact. When the visiting team scores a goal, the video replay guy shows the replay of the goal on the video screen as soon as he can, so that the home team’s coaching staff can watch for crease violations and such and know whether to throw the challenge flag. This also happens when the home team scores a goal that is waved off by the refs because of such violations. Depending on the arena’s camera placement and video system, you may get multiple angles and slow motion to make it easier for the coaches.

But the visiting team doesn’t get that courtesy. When their goals are waved off or the home team scores a goal that’s even remotely close to being questionable, you will not see a replay, or at least not until the time window for issuing a challenge has elapsed. The visiting coaches have to decide whether to throw the challenge flag from what they saw in real time, and this is much more difficult.

The intention of the coach’s challenge is to make sure that the refs get the calls right. Clearly we want as many calls to be correct as possible, so that a team that legally scores ten goals is credited with scoring ten goals, not nine or eleven. But to get that right as often as possible means either the refs replay every single goal, or the coaches have as many challenges as they want. Coaches challenges can take a fair bit of time which disrupts any flow the game has and kills any momentum for either team. It’s also boring for fans, particularly those on TV who might leave to watch something else. We have to balance “getting all the calls right” with “don’t disrupt the flow of the game”, and so we limit the number of challenges.

Refs are human and so they’re going to make mistakes from time to time and we accept that. That’s why the challenges exist. But for a team to be able to handcuff the opposing coach and not their own is too much of an advantage, in my opinion. Suppose we said that the home team should get four challenges and the visiting team only two. Or that the visiting team is allowed one fewer coach on the bench. Nobody would accept those changes. But somehow it’s OK if the home team gets better insight through technology as to when to use their challenges?

The home team already gets a number of advantages, as I listed above, though most are “intangible”. But this one is not and in my opinion gives the home team too much of an advantage. The goal should be to get calls correct, as many as possible, so that the players decide the outcome, not honest mistakes made by the referees (who also have to make goal/no-goal calls in real time). To make this process more fair, replays for all goals should be put up on the video screen as soon as possible, and we should tweak the rules for challenges so that all coaches have a chance to see the replay before deciding whether or not to challenge.

One thought on “The home floor advantage”