The league has released its list of rule changes that will be in effect for the 2017 season. As usual, there are a few that might have a big impact, a bunch that will probably not affect things very often, and a few that may never come up at all but they wanted something specific in the rule book just in case. I’ve looked over the list of changes and compared them with the 2016 rule book, and here’s what you need to know.

The most obvious change is that there will be three refs on the floor this year rather than two. Strangely, this was listed on the NLL.com article on the changes, but I couldn’t find anything in the rule book that lists the number of referees. They did add a clause discussing challenges that says “In a three man on the floor mechanic, …” but that’s the only mention of having three refs.

The remaining rule changes are listed with a reference to the rule number.

Coach’s challenges can now be used for determining whether the ball was batted into the goal, whether the shooter’s stick head is behind the goal line when he shoots (how would that even work? I believe there’s already a rule that says the ball can’t bounce off the goalie’s back), or whether an attacking player went into the crease, left it, and was then the first to receive a pass or gain possession of the ball.

Coaches get two challenges per game plus one more if they win the first two. That now only applies to regulation time. Coaches now get one challenge in OT.

There’s another clause that’s been added that makes no sense to me. Coaches are not allowed to use challenges during the last two minutes of the fourth quarter or the last two minutes of overtime – if they do, they will be charged with using a challenge even if no replay is actually done. But challenges can’t be called at that time anyway so what does it matter if you are charged with using one?

If two refs have a discrepancy in whether a goal was scored or not (i.e. one calls goal and the other waves it off), the crew chief will review the play. Neither team is charged with a challenge.

Each team can have up to 19 players eligible per game, up from 18. No more than 17 runners, up from 16, can be used. Adding only one extra player doesn’t sound like much, but this could have a big impact. Not only will it change up the lines and add more strategies for coaches, but it will give players just a little more rest during games so we don’t see quite as much fatigue (or worse, injuries) near the end of the game.

Note however that the roster sizes are not changing so this doesn’t mean there are more employed players. It simply means that there will be one fewer “healthy scratch” per team per game.

Jerseys are now required to have the player’s number on each shoulder or bicep.

A player given a major penalty with less than 5 minutes remaining in regulation will be given a second major penalty “for accrual purposes only”. The rule specifically says this is “not a time served penalty”. The very next rule says that any player that gets two majors in a game will automatically get a game misconduct, but it’s not clear whether this second “accrual” major counts towards that. If it doesn’t, I don’t know what the point of this penalty is other than to pad one’s PIM numbers.

The previous rule said that players given a match penalty would automatically receive a two game suspension. Now they are given a “one or two game” suspension. No word on how that is decided.

If a player (non-goalie) falls on the ball or closes his hand on the ball in his own crease in front of the goal line, the opposing team gets a penalty shot. The new rule is that if it happens behind the goal line it’s just a loss of possession.

Rule 44: FACING AT CENTER
44.4 CONTESTING THE BALL ON THE FACE-OFF

This one seems too obvious to even write down. If a player doesn’t contest the ball during a faceoff, the other team gets possession. So if you don’t try to get the ball, you don’t get the ball. 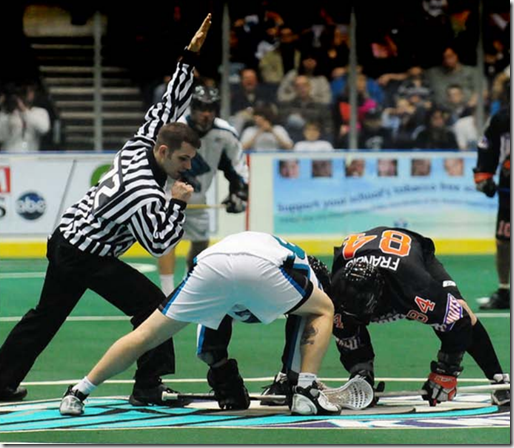 Rule 57: CRITERIA FOR STOPPAGE OF PLAY ON A DELAYED PENALTY

I’ll just quote this one since I can’t really summarize it any better: “An offensive player not in possession of the ball cannot exert significant unequal pressure on his defender as an attempt to gain space away from his defender“.

If an attacking player is legally checked into the crease and is then prevented from leaving the crease by a defender, a holding penalty is called. If a goal is scored, it counts (assuming no other violations). This is only slightly different from the existing rule, which talks about a player being illegally pushed into the crease.

This change adds some vague wording to this rule about “officials shall consider the positioning of players when contact is initiated” and “an appropriate penalty for illegal body checking shall be assessed based on the severity of the illegal contact”. The idea is that if a player has his head down or is “unaware of an impending hit”, the ref has the discretion to increase the penalty.

The definition of “aggressor” no longer uses the word “aggressor”. It is now defines as a player someone who keeps fighting even after the ref has told him to stop and tried to pull him away.

When goalies are inspected before the game, their jerseys may be on or off (before it was off), though it doesn’t say if that’s the goalie’s choice or the ref’s. If a goalie is found using illegal equipment, he will get a major penalty (used to be minor). He won’t have to serve it himself but can’t return to the floor until the penalty expires. Also, if a ref is just about to do an inspection and the goalie adjusts his equipment to make it smaller, he gets a 5-minute penalty.

Rule 92: DELAYING THE GAME
92.2 THROWS, RETAINS OR ROLLS BALL AWAY