In many sports, some players go on to become coaches once they hang up their skates, cleats, or whatever other footwear they happen to use. Sometimes these transitions work out well, other times they don’t. But one thing I’ve noticed over the years is that in the NHL, the really great players frequently don’t make great coaches, and great coaches were generally not great players. Wayne Gretzky is the obvious example of the former – arguably the greatest hockey player ever was at best a mediocre NHL coach. On the flipside, Don Cherry played a single game in the NHL. Pat Burns never did, nor did Scotty Bowman, Ken Hitchcock, John Tortorella, or many of the current NHL coaches. Patrick Roy is one counterexample – he’s the only one of the thirty current NHL head coaches who was a truly great player. Patrick Roy hasn’t coached in the NHL since last season. Not sure how I missed this.

It’s funny how different this situation is in lacrosse.

Think of two of the best NLL players ever: Gary Gait took the Mammoth to the championship in his first season as an NLL coach, and has been coaching women’s college lacrosse for many years. John Tavares has been an assistant coach of the Bandits for a year and a half and by all accounts is doing a great job. 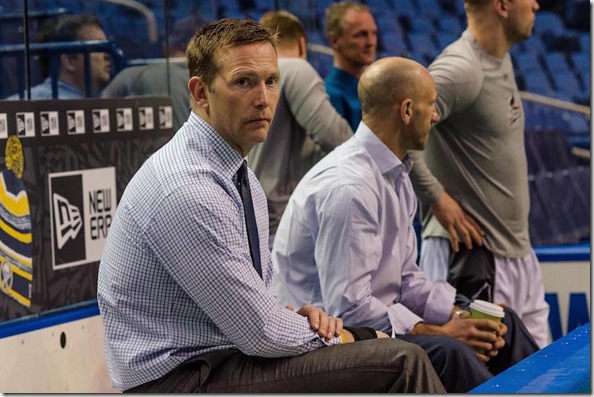 But the list of current and former coaches who aren’t just former players but were great players is surprising: Tavares, Gary Gait, Paul Gait, Darris Kilgour, Rich Kilgour, Troy Cordingley, Jim Veltman, Tracey Kelusky, Glenn Clark, Blaine Manning, Dan Ladouceur, Dan Stroup, Chris Gill, Pat Coyle, Curt Malawsky, Derek Keenan (short career, but he did win Rookie of the Year), Kaleb Toth, Jimmy Quinlan, and I’ve probably missed some. Pretty much everybody I just listed was at one time one of the best at his position on his team, if not the league.

At one point just a couple of years ago, four of the nine head coaches in the NLL (Darris Kilgour, Cordingley, Keenan, Bob Hamley) were members of the 1993 Bandits, which also included future coaches Tavares, Veltman, and Rich Kilgour. Similarly, current coaches Stroup, Gill, Coyle, Veltman, Clark, Ladouceur, Campbell, and Keenan were all members of the 1999 Rock.

Who will we be talking about as the great NLL coaches in ten years? Colin Doyle? Brodie Merrill? Mark Steenhuis? Dan Dawson?

Left as an exercise for the reader: Why is this situation so different in hockey than in lacrosse?

One thought on “Do great players make great coaches?”