The Knighthawks did not look like the same team that demolished the Bandits a few weeks back. Their offense was haphazard – they actually looked a bit like the Rock in their first couple of games. That said, they were up against the Rock defense, who had a great game. A couple of the Rochester goals were scored from inside (I specifically remember Dawson’s goal – he basically ran straight up the middle almost untouched) but for the most part, they were all outside shots because they just couldn’t get to the inside. 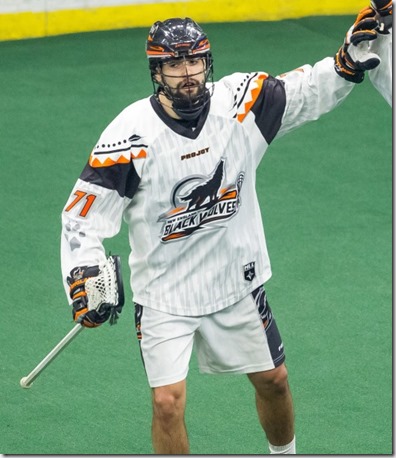 As good as the Rock’s offense and defense was, their transition game was on fire. It seemed that almost every time a Knighthawks possession ended, there was a Rock transition scoring opportunity – a two-on-one or partial breakaway. Burns, Rogers, Merrill, Caputo, Edwards, Sorensen, Harris, even Hostrawser were flying up the floor all night long.

Nick Rose played well in general, stopping most of the shots he should have stopped. He also stopped at least one shot he had no earthly business stopping at all, robbing the Knighthawks of a wide-open almost empty-net goal with an acrobatic stick save. Rochester scored on a very similar play later in the game, but we gave Rosey a pass on that one since you can’t expect that kind of miraculous save twice in one game.

Matt Vinc was not strong in the Rochester net and was pulled after only thirteen minutes. Note that he had already faced 17 shots by that point, but didn’t seem to be seeing the ball well. Angus Goodleaf came in and did a pretty decent job, finishing with a respectable save percentage of 77.8%, but the Rock offense took enough shots that saving 77.8% of them still led to 11 goals.

I know it’s only been a couple of games but trading Stephan Leblanc for Sheldon Burns is starting to look like a brilliant move. Burns is all over the floor, scoring goals and intercepting passes, and seems as much a quarterback of the transition as Brodie Merrill. As I’ve said before (I think), it’s not like Leblanc was a drain on the offense and getting rid of him has helped them. Their improvement over the first two games was just a matter of timing. They’ve simply adjusted after the addition of Hellyer and Jones and offensive coach Blaine Manning has them playing like a well-oiled machine. Guys like Reinholdt, McArdle, and Craig are contributing not only with goals but in getting inside and setting picks; Reinholdt did a particularly nice job with a pick that allowed Schreiber a wide-open look at the net for one of his four goals. The fact that they’re not missing Leblanc (or Lintner, see below) is not a statement on those players or their abilities, it’s a testament to the players they have.