Here it is: a team full of players who are not on a team, i.e. not on any roster or practice squad and not on any retired, injured, holdout, PUP, or other list. I’m quite surprised at who’s on this year’s list, considering there are two more teams than last year, and thus forty-two more positions available. And even with all of those extra players, these guys are still around.

Well, it’s not quite a full team since I only have 17 players. There aren’t a lot of forwards, so this Blazers team may have some trouble scoring goals, but they have a proven goaltender in Tyler Carlson and a pretty impressive defensive core. And they’ll win a bunch of faceoffs with Jay Thorimbert. They even have two former NLL captains in Joel White and Billy Dee Smith.

In making this list, I am explicitly assuming that Kevin Crowley, Curtis Dickson, Wes Berg, Nic Bilic, Robert Church, and Mike Messenger will sign contracts. If they don’t, none of them would make this list anyway since they’d either be put on a hold-out list or be released, in which case some team will instantly pick them up. 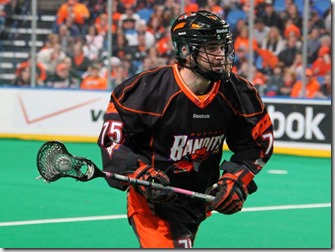