I’m a fan of the PLL. They seem like a first-rate operation, they treat their players well, they market themselves well, and they’ve obviously given a lot of thought to the game itself and how to improve it. The end result is a league featuring great players and great teams that’s a lot of fun to watch. But I do have an issue with their social media team.

In 2020, the PLL merged with the MLL (or maybe I should say they “absorbed” the MLL). The PLL now owns essentially all of pro field lacrosse history.

Since then, they’ve talked on social media several times about team or player records as being “pro lacrosse” records. When Paul Rabil set the career record for points in the combined MLL & PLL, they repeatedly referred to it as the “pro lacrosse record”, even though 36 players in NLL history have more than Rabil’s 657 points. In fact Rabil himself has more than 657 pro lacrosse points since he picked up 121 points in his five NLL seasons. Recently they tweeted a number of MLL and PLL trades and asked about “pro lacrosse trades that left you stunned”. Not a single NLL trade was listed, though a lot of NLL fans responded with NLL trades.

Of course, the NLL is also professional lacrosse, so using “pro lacrosse” to refer only to the PLL is just wrong. This is not an opinion, it’s simply factually wrong. 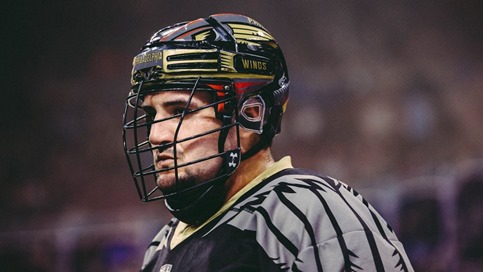 Photo: Blaze Riorden, a star in both the NLL and the outdoor league

Every time they do this, there’s backlash on social media. NLL fans, broadcasters, players, and even executives have publicly called them out on this, and yet it continues and I’ve never seen a response. Even during PLL game broadcasts, the NLL was rarely mentioned. When it was, the majority of the time it was just called “the indoor league”. I don’t know if the broadcasters were instructed to do so by the league, but it seems awfully coincidental that neither the league nor its broadcasters want to acknowledge the NLL, at least by name.

Why on earth not?

There’s no real competition here. Being a lacrosse fan is not a zero-sum game – introducing PLL fans to the NLL doesn’t mean their level of PLL fandom will diminish. Their seasons don’t overlap so they’re not competing directly against each other, for players or for fans. I would think the two leagues would want to work together, especially if they want to have full-time players in the future. At some point, it’s not unlikely that each league might at least consider saying “if you play in our league, you can’t play in theirs”. If the two leagues have worked well together in the past, they might work to avoid making that rule, to keep everyone happy. Having one repeatedly and blatantly ignore the other does not bode well for future partnerships.

Perhaps they think of box lacrosse the way NHL fans think of field hockey. No NHL fan or player or team includes the word “ice” when they talk about hockey, so they are intentionally excluding field hockey from whatever they’re describing. Is that what the PLL is doing? “If I don’t say the word ‘box’, then I obviously mean field lacrosse.” Maybe, but the difference is that in North America, ice hockey is orders of magnitude more popular than field hockey. There is no pro field hockey league in North America. If someone tells you they know a pro hockey player, you don’t ask “ice or field?”

Plus when the NHL talks about someone having a record, they’ll generally say “NHL record”, not “hockey record” or “pro hockey record”. I get that the PLL is saying “pro lacrosse record” because they know that the PLL is so new that “PLL record” doesn’t mean much and it may not be clear that PLL records now include the MLL. To them, “pro lacrosse” better indicates that they mean both. Also they want to be clear that their records do not include college (i.e. non-pro) lacrosse. But I’m not sure why they wouldn’t want to be clear that they’re not including box lacrosse either.

The NLL has been around for 35 years, the PLL 3. Even if you include the MLL and PLL history together as a single unit (which is fair – they did merge), the NLL still has fifteen years on them. Average attendance at MLL games was around 4,000-5,000 per game, while the average for the NLL is double that (around 9,400). It’s not like field lacrosse is huge and box is the distant fringe cousin. Let’s be honest here – they’re both fringe. This is not ice vs. field hockey.

Maybe in the United States if you talk about “pro lacrosse”, most people would assume you meant field and in Canada, most would assume box. Since the PLL is based in the US, they go with the former. But they have to know that that’s certainly not true within the lacrosse community as a whole.

I’m sure there are people out there laughing at all the “butt-hurt NLL fans complaining about the PLL”, thinking we’re complaining about nothing. Maybe they’re right. But if you’re going to grow the game (and there’s no question the PLL is doing that, and doing it well), why make an effort to piss off all the box fans for no obvious gain? Throw the word “field” in there when talking about your records and history and everyone’s happy. Then you are actually growing the game and not just your particular version of it.