The trade deadline has come and gone, and a couple of teams made a couple of deals, but nothing really Earth-shattering. But there was big news from the NLL front office for the second time in a couple of weeks, and after a shaky start, Panther City has really pulled things together.

Jessica Berman leaves the NLL for the NWSL

This is awesome for Jessica and for the NWSL, not so much for the NLL. Berman was brought in from the NHL a couple of years ago as the new deputy commissioner, seemingly as the heir apparent to Nick Sakiewicz. Nick’s departure made Jessica the interim commissioner, and had she progressed to the full-time commissioner’s job, she would have been the first-ever female commissioner in a North American men’s sports league. But before that could happen, the National Women’s Soccer League came calling and she decided to take that job as commissioner. You know how it is, when you have to choose which top-level professional sports league to be commissioner of? It’s tough. Anyway, congrats to Ms. Berman on her new job. As for who the next commissioner of the NLL will be, right now it’s anybody’s guess. I assume they’ll promote someone to interim commissioner and then do a full search, like they did when George Daniel left the position.

I’m so old, I remember when Panther City was one of those “they’ll probably be good in a year or two but right now, not so much” teams. Man, those were the days. Now, they’re on a three-game winning streak with wins over three division rivals including this weekend’s 20-14 drubbing of the Mammoth, who were 6-3 going into that game. They became the first team to score 20 goals in a game since the Black Wolves did it in December 2019, Patrick Dodds cemented himself into the Rookie of the Year conversation with an 11-point night, and Nick Damude scored the first goalie goal of the season. Do I think PCLC will continue their winning ways all the way to a 10-8 record and a playoff berth? Likely not but they have shown, as the Riptide have, that they truly can compete with anybody. It’s really weird that teams could be more worried about an upcoming game against PCLC or New York than they are about a game against the Saskatchewan Rush. 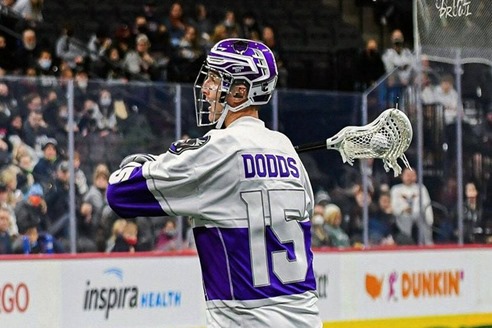 One of the bigger questions of the season: when you play the FireWolves, which team will you get? Do you get the one that has beaten the 8-2 Seals once and the 8-3 Thunderbirds twice – and kept Halifax to 13 goals total in those two games? Or do you get the one that allowed 31 goals in two losses to the 3-8 Knighthawks? They had a three-game win streak earlier this year where they gave up 5, 8, and 6 goals, and they only allowed 7 to the Thunderbirds last weekend. But in between, they went 2-5 and allowed 12+ goals in all but one of those games. The FireWolves could be a playoff team in the east, but they’ll have to be more consistent in order to fight off a surging Swarm team that just got better (see Trades below).

Trades are always awesome (except when it’s just draft picks for draft picks – sometimes necessary for the teams I guess but BORING), and we had several just in advance of the trade deadline:

For a not awesome, this one isn’t really that bad. Yes, Halifax lost two games this past weekend, but they’re still 8-3 and they only allowed 18 goals total between the two games. That’s not terrible, but when you’re 8-1 going into a weekend, going 0-2 over that weekend is sub-ideal.

The Rock and Bandits beat their opponents last weekend by a combined score of 31-10. Blowout games like that are really no fun for anyone, except perhaps the rookies or secondary players who might get a little extra playing time. The winning team wants to keep their foot on the gas without being accused of running up the score, while the losing team just wants it to be over. Even the fans tend to lose interest when the outcome of the game is decided long before the final buzzer. Of course this is lacrosse, and we’ve seen eight or even nine goal leads in the third quarter vanish. I saw a seven goal lead with less than ten minutes left in the fourth quarter vanish once, so it’s never really over until it’s over. But sometimes it’s just… over.

Teams that notably did nothing at the trade deadline: