And this is good, because winter is NLL season! The 2019-2020 NLL season begins on November 29, which is only eleven weeks from now. In fact by the time you read this, it will be less than eleven weeks from now. The league released the schedule for the upcoming season this week, just ahead of next week’s entry draft. Of course the timing is done by design since now that the summer championships (President’s Cup, Minto, Mann, etc.) are done, there ain’t much happening in the box lacrosse world right now.

I’m sure there are fans of each team who think their team was screwed over the most by the schedule makers, as if the schedule makers intentionally decided to give a team two consecutive bye weeks and then a few weeks later, have them play games on consecutive days a thousand miles apart. Yes, that makes total sense because making a schedule that pisses teams off is a great way to keep your job. That being said, it’s true that some teams have tougher schedules than others.

If you want all the details, check out Evan Schemenauer’s article over at Lax All-Stars. There would be no point in me rehashing it all here, since it’s all over there. But I will go over some oddities I’ve noticed in the schedule. 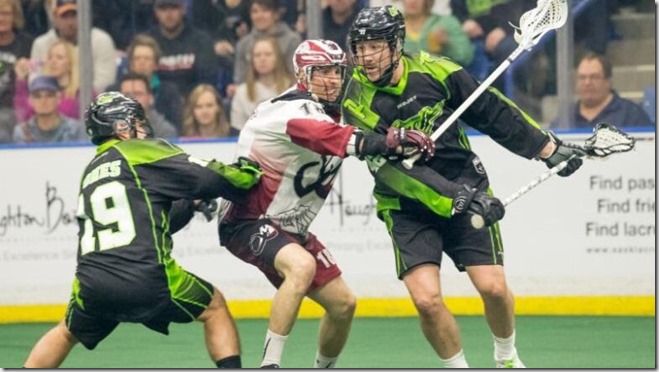 Seven of the thirteen teams have two bye weeks in a row at some point. Calgary has two straight bye weeks, plays three games in seven days, and then has another two byes. Luckily for them it’s early in the season – if you’re trying to build up momentum going into the playoffs, playing only three games in almost two months won’t help. Philadelphia has byes in three of the first four weeks of the season, and two of the last three. The Rush have five byes in the first ten weeks and then play every weekend from February 8 until the end of April.

Each team plays twice in the same weekend at least once, while Calgary, New York, and Philly do it three times. The worst travel weekend will be week 11: the Warriors play the Bandits Friday night in Vancouver and then both teams come east for Sunday afternoon games, with the Warriors heading to Rochester and the Bandits to Toronto. Week 16 for the Roughnecks isn’t much better: Friday night in Calgary, Sunday afternoon in New England. But in all three cases, there’s a full day in between so it isn’t as bad as it could have been.

Most teams have the home and away games split up fairly evenly. Rochester is probably the best for that – they play back-to-back away games only twice (once separated by a bye week) and back-to-back home games just once (also separated by a bye). The Black Wolves’ schedule, on the other hand, is more clustered. They play an away game on December 14 and don’t play on the road again until February 28, two and a half months later. They play six straight home games in that stretch, along with four bye weeks. Then they play six of their last eight games on the road.

Overall, there are 27 games on Fridays, 74 on Saturdays, and 16 on Sundays. Every team plays at least once on a Sunday though Calgary, Saskatchewan, and Buffalo play theirs on the road. Four out of New England’s nine home games are on Sundays. The Rush, Bandits, and Knighthawks play eight of their nine home games on Saturdays, while the Warriors play six of theirs on Fridays.

Is it an ideal schedule? No. I’d like to see it shortened, with each team having a bye week or two, not five or six. Personally, I’m not a big fan of Sunday afternoon games either, but they have to happen – especially after a Friday game across the country. But is any of this surprising? Nope. Welcome to the NLL, where each team is usually the second- or third-ranked tenant in their building. They take the dates they can get.