The Calgary Roughnecks signed Dane Dobbie to a multi-year contract last week. Considering Dobbie had a career year in 2019 and was deservedly named both season MVP and Championship MVP, it’s hard to argue against this, regardless of the term or money he was asking for. But when the NLL tweeted about it, they used a goat icon and I had to roll my eyes.

GOAT stands for Greatest Of All Time and it’s become a term that, in my opinion, is thrown around far too easily in the sports world. By definition, there can be only one GOAT in each sport. There may be controversy as to who it is, but there aren’t lots of them. I don’t think it’s a hot take to say that Dane Dobbie is not the greatest player in NLL history (despite his teammates saying he is). The hot take might be: he’s not even in the top ten. But that’s an article for another time.

Of course you can add your own qualifiers, and a player may be the GOAT of a certain subset of players. As Jake Elliott pointed out, the NLL probably meant that Dobbie is the Roughnecks GOAT, not the GOAT. That’s totally fair and Jake is quite likely right.

But that got me thinking: what about the other teams? Who is their GOAT? Some are obvious – Buffalo comes to mind – while others are more contentious.

One question we have to answer first is what do we mean by this? Is it the best player to ever wear that uniform, or is it the best player to ever have an impact in that uniform? For example, you could argue that the second Dan Dawson takes the floor as a member of the Toronto Rock this coming season, before he’s even touched the ball, he’s among the top three players ever to wear the Rock jersey. But is that meaningful?

For this article, I’m going to say that it’s not good enough to simply have worn a team’s jersey, you have to have played there for a significant amount of time. However I’m not going to define “significant” with specific guidelines (e.g. you have to have played x games or x seasons or have won some sort of major award). Just going with my gut here.

I’m going to skip the expansion Knighthawks 2.0 and Riptide for obvious reasons and also the Wings 2.0 and Seals since they have only played a single season.

Buffalo – Tough one, but I’m going to go with someone who many consider to be the GOAT of the league, if not the entire sport of box lacrosse. Of course it’s John Tavares. 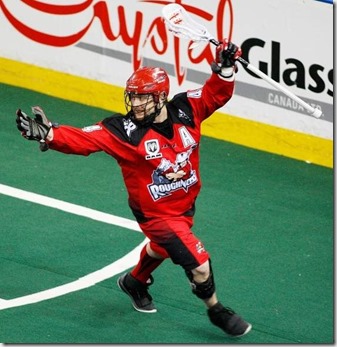 Calgary – My “tough one” for the Bandits was obviously in jest but this really is a tough one. If you go with the “just wearing the jersey” rule, I’d put Josh Sanderson and Shawn Evans at the top of that list. Sanderson played two full seasons and part of a third and while they were outstanding seasons and included a championship, he’s more associated with the Rock. Evans is a tougher call because he played four seasons including two with 110+ points and one MVP trophy. The guy who started this whole conversation, Dane Dobbie, has played 12 seasons (all with Calgary), won two Championships, and is the incumbent MVP. Jeff Shattler was an MVP and played eleven great seasons in Calgary so he has to be considered. Kaleb Toth was never an MVP but was the quintessential Roughneck for years. What about Tracey Kelusky? Higher point averages than Shattler or Toth, and team captain for their 2009 title.

Given his longevity, I’m going with Dobbie.

Colorado – Is it John Grant or Gary Gait? Gait only played three years with the Mammoth while Grant played seven (well, six plus two games in the seventh). Interestingly, their points-per-game numbers are almost identical: Grant averaged 5.632 points per game over 98 games while Gait averaged 5.625 in 48 games. If Gait had played 98 games with the Mammoth like Grant did, he’d have 551 points. Grant has 552. Both won an MVP award with the Mammoth and neither won a Championship (Gait did as a coach), so basically, they were the same guy. Grant played twice as long in Colorado as Gait did so I’m going with Grant.

Georgia (including Minnesota) – If you just consider the four seasons in Georgia, I think the obvious choice would be Lyle Thompson. But if you include the Minnesota years, Callum Crawford and Ryan Benesch jump into the mix. They each had slightly higher points-per-game numbers than Thompson, but even at their peak, I don’t think either of them were as good overall as Thompson is.

Halifax – (as the Rochester Knighthawks) John Grant is the obvious choice because he’s one of the best players in the history of the league. But Matt Vinc has to be considered here. Grant won one Championship and an MVP award in his ten seasons with the Knighthawks. Vinc won three titles and about a hundred Goaltender of the Year awards. Grant’s dominance with the Knighthawks cannot be overlooked (he had an eight-year stretch with seven 90+ point seasons and only played five games in the eighth) but Vinc is probably the best goaltender of the last decade and definitely top three all-time. I honestly cannot decide so I’m taking the easy way out and calling it a tie.

New England* – Again Shawn Evans jumps out. He only played 2½ years in New England but averaged over six points per game in the two full seasons. Another candidate would be Kevin Crowley, who played most of four seasons with the Black Wolves. He wasn’t quite as dominant with the numbers but Crowley is great off-ball and defensively as well so his numbers don’t show how good he is. I’m going to go with Evans here.

Saskatchewan (including Edmonton) – Mark Matthews was my first thought but Kyle Rubisch is probably the better choice. Matthews has been a top-10 offensive player for his entire career (top 5 for most of it) but there was a four year period where Rubisch was hands down the best defensive player in the league, and he remains in the top three now.

Toronto – I’m going with Colin Doyle not only because he was an outstanding player (#4 in career scoring) but a great captain as well. Like Matt Vinc in Rochester, Bob Watson also needs to be considered. Josh Sanderson is right up there too, and Jim Veltman and Brodie Merrill were also great players and great captains.

Vancouver (including the entire franchise history) – I wondered about Lewis Ratcliff, Gary Rosyski, Colin Doyle, and even Josh Sanderson from the Albany Attack days. But in the end, it’s got to be Rhys Duch. Duch averaged about 5.4 points per game over ten seasons with the San Jose, Washington, and Vancouver Stealths. He led the team in goals, assists, and points in four straight seasons and was either first or second in those categories in three more. He was the face of the Stealth for a decade which is why it was so surprising that they unceremoniously released him before last season. Hey, can someone remind me who scored the OT goal that gave Calgary the 2019 Championship? I forget.

* Maybe others don’t have this problem, but I find it hard to think of the Black Wolves as a continuation of the old Philadelphia Wings. As a result, I didn’t consider Wings players for the Black Wolves GOAT, even though I did consider previous teams in the Vancouver and Georgia franchises. But the Wings were around for 28 years, so they shouldn’t be just tossed aside. For the Wings, I’d have to choose between Tom Marechek (12 years, four Championships, 773 points) and Dallas Eliuk (again, top 3 goalie of all time). Gary Gait only played five seasons in Philly but was named MVP in three of them (in a row), so he’s got to be up there too. I’m going to go with Eliuk.

2 thoughts on “The GOAT”